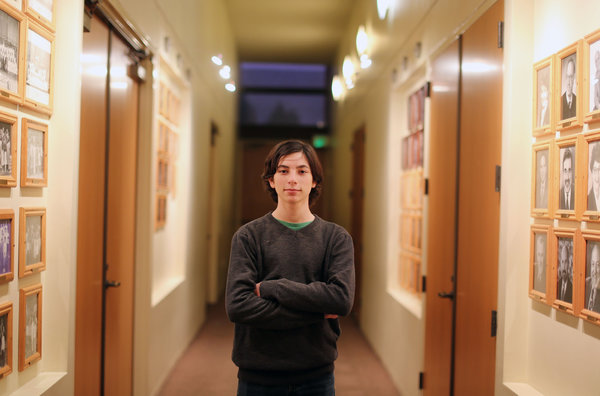 J. Emilio Flores for The New York Times Jordan Sachs-Amrami at Temple Isaiah in Los Angeles, which has been experimenting with the bar mitzvah process.

LOS ANGELES — The American bar mitzvah, facing derision for Las Vegas style excess, is about to get a full makeover, but for an entirely different reason.

Families have been treating this rite of passage not as an entry to Jewish life, but as a graduation ceremony: turn 13, read from the Torah, have a party and it’s over. Many leave synagogue until they have children of their own, and many never return at all — a cycle that Jewish leaders say has been undermining organized Judaism for generations.

As Jews celebrate the new year Wednesday night, leaders in the largest branch of Judaism, the Reform movement, are starting an initiative to stop the attrition by reinventing the entire bar and bat mitzvah process.

Thirteen Reform congregations across the nation have volunteered to pilot the change, and an additional 67 are on the runway. Everything is on the table: how or whether to teach Hebrew, whether to delay the ceremony until children are older, and even whether to require children to read from the Torah — now the centerpiece of most bar mitzvah ceremonies and the culmination of years of study. Parents will most likely be expected to play a larger role and emphasis will shift from prayer to social action.

“I like Torah, I read Torah, I study Torah,” said Isa Aron, who is helping lead the Reform movement’s initiative and is a professor of Jewish education at Hebrew Union College in Los Angeles. “But what’s the point of getting your 200 or 300 closest friends and family members together and having your kid read a text they don’t understand in a language they don’t understand?

“Maybe it shouldn’t be such a performance,” Dr. Aron said. “It should be about becoming part of the community.”

Reform leaders say American Jewry unwittingly sowed the seeds of its own stagnation in the 1930s and ’40s when synagogues, to expand their membership, began to require three or four years of religious school attendance as a prerequisite to the bar mitzvah. Synagogues built classroom wings and charged tuition, which became a vital income stream for congregations.

“We didn’t realize it,” said Rabbi Bradley Solmsen, the director of youth engagement for the union and a director of the new initiative, “but we sent the message to families that if you want to be a bar or bat mitzvah, you have to join the synagogue. And what they heard was, ‘When you’re done, you can leave the synagogue.’ We’d like to go back to our roots and say, How can we make it a point of welcome and not the exit point that it’s become?”

The phenomenon is not exclusive to Judaism. Churches also struggle to keep young members engaged, and studies show that younger Americans are far less likely to be religiously affiliated than their parents and grandparents. What is different for synagogues is that often when the youth depart, so do the parents.

The problem Jewish leaders are trying to tackle is deeper than the perennial lament about ostentatious bar mitzvah parties, revived last month with a YouTube video from Dallas of a bar mitzvah boy hoofing it with Vegas-style showgirls.

Their concern is that they have built up the bar mitzvah worship service as the pinnacle, putting children through a lot of time and effort geared to preparing them for a daylong event. Rabbis said in interviews that the event has become more a private service for the bar mitzvah family and friends than a communal event for the congregation.

Children and their families go through what some rabbis call an “assembly line” that produces Jews schooled in little more than “pediatric Judaism,” an immature understanding of the faith, its values and spirituality. Most students deliver a short speech about the meaning of the Torah passage they were assigned to read, but they never really learn to understand or speak Hebrew, only to decode the text.

“I learned the tune and I had the phonetics in front of me, all in a laminated binder,” said Jeff Berman, recalling his bar mitzvah years ago on Staten Island, “but honestly I could not tell you what it meant. I just knew it was important to my parents and grandparents for me to do.”