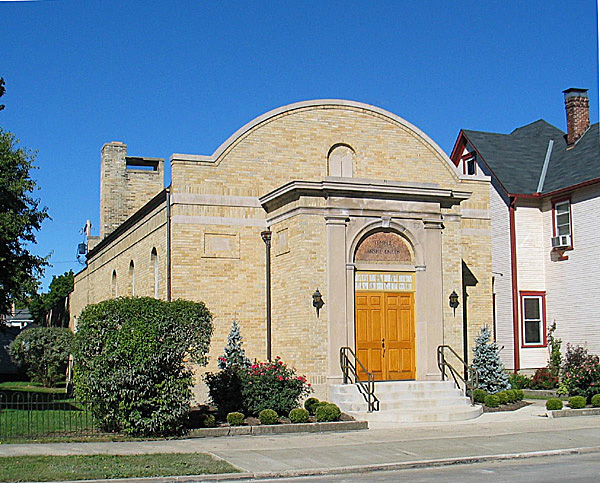 Originally, services were held only on the Holidays and on the first Saturday of each new moon. The meeting place was the home of Moses Friedlich. Afterward, however, the hall on the third floor of the building on the NW corner of Main and Water Streets was rented for a place of worship and the Congregation continued to assemble here until 1875.

In October 1875, the place of worship was moved to the third floor of the building on the NW corner of Main and Market Square, where it remained until 1894, the year the congregation moved into the building at the corner of High and Downing Streets.

At the meeting of the members of the Congregation held in January 1922, the matter of building a Temple was discussed and a committee was appointed to purchase a lot. The Congregation is grateful to L. M. Flesh for it was through his generosity that it was possible to have the little Temple which was dedicated April 2, 1923.

The Congregation was one of the first in the country to join the Union of American Hebrew Congregations. The membership consisted of approximately 25 families; several members living in neighboring cities.

In the 1958, the completion of the social hall and kitchen was added which serves as a community center.

The Congregational cemetery, Cedar Hill, is located near S. R. 36 on the east side of Piqua. It dates back to 1875.

Membership then and today is still about 25 families. The Synagogue serves members from Troy, Sidney, Piqua, Celina, Greenville and surrounding areas.